A scroll saw is the best tool when cutting complex curves in metal, wood, or other materials. It is a small-sized sawing tool that is a pedal or electric-driven saw you can find in the hardware stores. Because of the sharpness of its blade, it can cut quicker than a fretsaw or hand coping saw. It can even cut cleaner and more delicate than a power jigsaw. Just like other types of saw, scroll saw can cut curves with edges by rotating its working table.

The term scroll saw comes from its historical usage in the manufacture of scrollwork and sculptural decorations that proudly displayed scroll-head patterns.

Working Principle: Scroll saws operate similarly to band saws by moving the workpiece against the saw blade to cut it quickly. The main distinction is that a band saw’s blade is a continuous loop, while a scroll saw uses a reciprocating blade.

Scroll saw simplifies the process of cutting interior profiles using a scroll saw. Simply drill a hole in your workpiece, put the scroll saw blade through it, and connect the blade to the handle.

At first glance, you can see that the scroll saw has a unique design compared to the different saw types.

Due to scroll saws’ usage in creating complex shapes and intricate patterns, the saw’s design is made especially to suit its distinct purposes.

The power source for a scroll saw is the motor, which is quantified in amps. Typically, the motor of a scroll saw is between 0.6 and 1.5 amps. There are values greater than 1.5 amps, but they cannot be found easily on any hardware store. You may have to make a pre-order or look for it at online stores.

A scroll saw operates by threading a reciprocating, sharp blade through the workpiece.

Whether pinned or pinless, the blade of the scroll saw is attached from the upper side of the handle to the bottom side of the working table.

The following are some of the functions of a scroll saw that you would get to know over time:

The scroll saw comes with its own tabletop, which is often constructed of iron or aluminum, making it durable and suitable for woodworking.

Typically, the table’s ‘throat size’ is emphasized in woodworking.

The throat size refers to the distance between the blade and the rear of the table’s surface. This serves as a reference for the types of material you can work with.

Typically, scroll saws have throat sizes between 16″ and 20″. You can still find other models that have bigger throat sizes on your marketplace.

Another interesting feature is the bevel, which refers to the angle at which the table of scroll saw can be angled left or right. Bevel can help make a 45° angle cut and produce some really fascinating patterns, giving another level to your woodworking.

The table is where you will put your materials when cutting. It’s important to maintain this in excellent shape since debris or damage can badly affect your performance and harm you while woodworking.

The arm or handle refers to the mini-excavator attached to the table and connects the blade from top to bottom side of the working table.

You can already guess why it is called an “arm”.

Parallel- Linked Arm is the most recent development in the scroll saw technology.

The arm is connected to the motor and is responsible for keeping the blade in position.

In most cases, the arm also offers a variety of other features for woodworking, such as variable speed triggers that offer you complete control over your work pace, blade tensioning knobs that allow you to get the optimal blade tension, and an on/off switch.

Of course, these are just a few of the features available for the arm. Arms will have more functions if you install more tool accessories, including adjustable gooseneck lights and dust blowers for improved vision during woodworking.

As previously mentioned, a scroll saw’s blade is very thin and fine, and it is attached from the arm to the bottom side of the working table.

Scroll saws are suitable for pinned and pinless blades. Pinless blades, though, are commonly used for earlier models of the scroll saw.

The majority of current models of scroll saws support both types of blades.

Under the pinned and pinless categories, a blade’s configuration, which includes the teeth-per-inch (TPI) and its size, are primarily considered. ‘

Unfortunately, there is no uniform blade size system; nevertheless, there is a kind of numbering system that exists, which ranges from less than 0 to 9, in intervals of 2. (If you’re a little confused, this leaps to 3 and then goes up by 2)

There are eight distinct forms (and perhaps more) for a blade with its configuration. Each of them has a different impact on how it cuts, with some being somewhat rougher than others.

A critical aspect of operating a scroll saw is making sure that the blade is tensioned correctly for the task. It is not unusual for you to suddenly need to adjust the tension of the blade. With my experience using my scroll saw, I realized that I needed to change the blade tension while woodworking quickly.

There are several other methods available for adjusting the blade tension. Some include basic levers that can be adjusted into desired locations, while others use knobs. The most critical factor is location. You can find the tensioning mechanism installed on scroll saws either on the front or rear side of the scroll saw.

I cannot emphasize enough how essential it is to purchase a scroll saw for your woodworking. The scroll saw already has the tensioning mechanism located on the front side of the saw. It would significantly lighten your workload if you could change the blade tension instantly. Changing the blade instantly is only achievable if the tensioning mechanism is positioned on the front side of the saw.

A woodworker will find many useful applications for a scroll saw that other types of saws cannot. 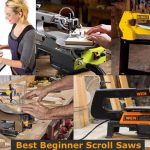 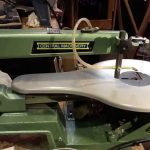 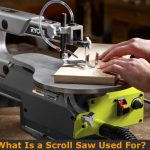 What Is a Scroll Saw Used For? 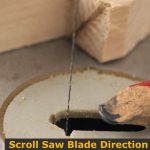 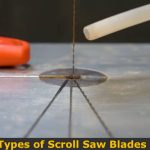