Do you know that for thousands of years, humans had been relying solely on hammers and the sheer power of their biceps to drive nails onto wood? Well, that is a fact, and it is incontestable, for the nail guns that make the lives of contractors and DIYers nowadays easy when driving nails were only invented in 1950. The burgeoning construction boom occasioned its invention after World War II.

Contractors wanted a tool that provided a snappier solution to the cumbersome driving of nails onto the wood. Therefore, some innovative GIs working in the construction industry came up with the ingenious idea of inventing the first nail gun.

Morris Pynooos, however, was credited for developing the prototype of the nail gun. Pynoos worked as an engineer in Howard Hughes’s aircraft, the H-4 Hercules. This aircraft was also known as Spruce Goose, made primarily of wood.

He invented the first nail gun to attach the craft parts together during the building of the large fuselage. Workers, however, first glued the nailed pieces and then dismantled the nails afterward. However, the first pneumatic nail guns became available in the 1950s. These nail guns were stand-up versions that could fire 40 to 60 nails per minute.

Detailed History of the Nail Gun and Staplers Evolution

As mentioned above, the first nail guns got introduced in the market in 1950 to enhance and speed up the construction of subfloors and sheathings for housing floors. The original nail guns got operated standing, and they could drive up to forty to sixty nails per minute. They also had a carrying capacity of up to 600 nails.

Their groundwork for inventing nail guns was machine guns. They proposed making an automatic nailer capable of driving nails in the way a machine gun would shoot bullets. They got the design and patent and went around the United States to peddle their ideas to get investors. They got their design actualized using air pressure to drive nails. The nail guns they made got operated standing; hence, they are called stand-up nailers.

They tried to sell it, naming it Port-a-Matic nail guns, but had little success. However, these inventors were not salesmen who could market their ideas so well. So, the company did not prosper. So, they later sold their concept to Bostitch.

However, cordless battery-powered nail guns did not become popular quickly because battery technology wasn’t fast enough at that time to develop into powerful and long-lasting batteries.

In the last few decades, however, battery technology began improving at a rapid clip, which enhanced and improved the battery-powered nail guns as well. You can now buy cordless nail guns that could even equal the performance of the pneumatic ones.

In 2019, however, Airbow, a company based in New Zealand, began rolling out a pneumatic nail gun that is rechargeable. This pneumatic nail gun liberated itself of the tether to the air hose. This nail gun uses more advanced valve technology. Moreover, it only uses only a gram of air to shoot nails. This compressed-air gets stored in the nail gun itself. You can recharge this nail gun via a compatible air compressor.

The earlier nail guns got primarily used for fastening flooring. Then, it evolved into a roofing and framing nail gun. Soon after, upholstery nail guns appeared, which further made the works of furniture makers easy.

Afterward, brad nailer got invented. These nailers make use of thinner nails called brads. These brads are nails that got fashioned out of wires. You can use the brad nailers for nailing delicate materials to reduce splitting and damage to materials.

Staplers, however, had a more extended history than nail guns. Its history dates back 130 years ago in France. King Louis XV first used the newly invented stapler. Over time, the staplers evolved, and now we have more powerful staplers that you can use for your woodworking and other tasks.

I always think of the nail gun as one of the most innovative inventions for contractors and woodworkers who thrive in driving hundreds of nails every day. Just imagine, for example, if you would drive hundreds of nails using your bare hands and a hammer, you might end up enervated after the day. Yet, driving nails quickly becomes a breeze using nail guns.

Nail guns have been here for only seventy-five years. Yet, they have innovated at a rapid clip. New features get added to their designs, improving further the nail guns. Besides, the batteries of nail guns get better and better. So, you can expect more powerful cordless nail guns in the future. 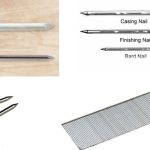 What Are Brad Nails Used For? 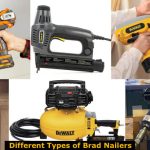 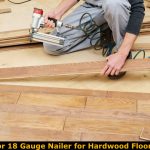 16 or 18 Gauge Nailer for Hardwood Floor? 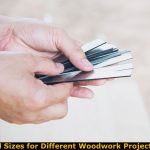 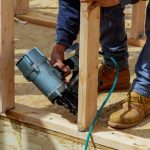 What Degree of Nail Gun is Best for Framing?