If you usually transport your miter saw to different workplaces, you can fold the saw for easy transport. Most miter saws would have an automatic locking system wherein it automatically locks itself into position to make it easy to carry around. But if it is your first time taking an automatically locking miter saw, you might find yourself scratching your head if you don’t know how to unlock it.

So, if you happen to be in this predicament, it will be good to know how to unlock your miter saw. The good thing is that unlocking a miter saw is an easy process. Yet, you need to know and understand its locking mechanism.

If the guard doesn’t lift with the saw blade, it might be that the guard is not clean and has gotten stuck. In such a case, you need to clean it to make it move freely.

Types of Lock You Will Find on a Miter Saw

One lock you will find in a miter saw is the blade lock. The blade lock is usually at the miter saw’s backside. There you will usually see a pin. You only must apply downward pressure on the miter saw head while you pull the pin. Immediately, you can unlock the saw blade.

The saw blade sports a downward position to keep you safe when you carry the miter saw. It also holds this position when you don’t use the saw. The blade guard covers the blade’s upper part. The lower body of the saw blade is tucked underneath the table. It is locked in the back, wherein the saw blade makes a pivot. A knob controls this down position lock.

You will also find a push or pull lock on miter saws. This lock consists of a pin and a knob. You need to push or pull the knob to let loose the blade. Some models require twisting the knob instead of pulling or pushing it. In most instances, however, the saw blade releases after you release the pin. As mentioned above, the guard should go along with the saw blade as it lifts.

Another type of knob is the knurled knob lock. You need to twist this knob counterclockwise to unlock the saw blade’s swivel action (side-to-side).

This type of lock is located at the front parts of the saw. These locks control the angles. Moreover, these two locks consist of a large and horizontal knurled knob and a lever underneath. The large knurled knob locks the blade’s swivel action (left-to-right).

The underneath lever locks the presets and releases them for common angles. In some models, you will find the lever on the knob’s top. Other models have front locking controls.

Another type of lock is the preset angle lock. You only need to depress the lever if you want to release it. This lock is spring-loaded. You need to use your middle or index finger to press on the lever.

You will often find the preset angle locks built into the miter saw. The large knob lets go of the saw blade and free it from use. The smaller lever locks in different angles for making miter cuts. It also lets you adjust the blade’s angle for ease of transport.

You can quickly adjust between different preset angles by depressing this lever. Then, you can rotate it to the desired preset stop. You can also release this lever if you want a custom cutting angle.

Another lock type is the Swivel and Lock type of lock. You only need to swivel the handle while you depress the lever. In this way, you can easily adjust the angle. You also need to stop swiveling for a custom angle or allow the lever to get engaged in a preset angle.

Listen to the click when the lever makes a pass over the pre-determined notches. Then, release this lever to engage the selected presets. Once you’ve set the angle, you can turn clockwise the knob to lock it in.

You will also find the bevel locks on a miter saw. You will find these locks in some models of miter saws, for other models can’t do bevel cuts. Yet, those models that could make bevel cuts usually have these locks.

These locks also operate using a spring-loaded lever or have a pin to keep it locked. Thus, you can press the lever while holding it down. Then release it when you have gotten to the angle you like. You can also use the pin lock in the same manner.

Bevels likewise come with many preset lock stops at the common angles. Yet, you can avoid these stops by releasing the lock over the desired angle.

Simple Steps on How to Unlock a Miter Saw

To unlock the miter saw head, you can press on it while locating the lever or pin. Most miter saws come with a pin or knob designed to lock the mechanical ankle. You will often find this at the back of the saw blade near the main base’s center point.

You only must pull out the pin. Immediately the head will unlock. If you got a sliding miter saw, you would find the lock on the slide. You need to loosen this lock to let the mechanism move back and forth.

After unlocking the head, you can also unlock the table. Modern miter saws usually come with a visible knob that is attached to the base. This knob has a clear purpose. It lets you move the base to allow you to select the right angle.

Most modern-day models also come with angles marked out at commonly used angles. You only need to align the base part that rotates with the static one marked with the preset angle.

To adjust the tilt, you need to find the integrated stop near the base and slide it. Some models come with drilled holes for stopping the head from further tilting. These holes are also preset to specific angles.

How to Unlock a Sliding Compound Miter Saw

Miter saws come in different types. If you happen to have a sliding compound miter saw, you can easily cut angles for baseboards and moldings. This type of miter saw has a safety feature that locks the saw head when you’re not using the saw. This locking feature keeps the blade safely tucked away and unexposed.

To unlock the sliding miter saw, you need to press its handle. Then, find the locking bolt on the saw body’s base. It is near the hinge. This pin appears like a bolt with a flat round head. Afterward, pull its spindle to dislodge it from the hole.

Once you hear the popping sound, it means you’ve unlocked it. The spindle, however, will not detach from the saw. Afterward, let the head raise itself slowly. Don’t let the head jerk for the saw might get damaged.

Afterward, turn back the knob counterclockwise. This counterclockwise movement unlocks the sliding saw to let it move back and forth. Never forget to lock the saw when you are carrying or transporting it.

How to Unlock a Ridgid Compound Miter Saw

Ridgid miter saw comes with a safety mechanism. This mechanism is its lock. Moreover, this safety mechanism consists of lower and upper locking assemblies. This locks in position safely the saw blade behind its blade guard. In turn, this makes the Ridgid compound miter saw very compact and easy to stack away.

To unlock this mechanism, you need to remove the saw cord from the electrical outlet and position it on a sturdy table. Hold the handle using your right hand. Then, release the pressure by pressing on the upper spring assembly.

Then, using your left hand, you can pull out the locking pin from the saw until it stops. You can find this locking pin at the back left side of the saw. You can then let go of the upper assembly and let it rise vertically.

You can’t use the Ryobi compound miter saw without unlocking it. To unlock it, you need to set the miter saw so that you can see its back. In this position, the saw blade is on the right while the motor is on the left. Underneath the motor housing, you will see several air vents for ventilating the motor.

Under the crankcase, you will find a silver metal pushpin right at the left side of the blade arm. To suspend the saw blade onto the base, you should press on the carrying handle. Then push, as far as you can, its pin.

You can then raise the carrying handle after pushing in the pushpin. Hold the handle while you push it onto the axis. Otherwise, the saw blade would germinate and cause damage to the saw.

How to Unlock Tradesman Miter Saw

The spring lock, on the other hand, locks the saw when you achieve the perfect angle. You unlock it when you need to reset the miter angle. Then, lock it again once you use the saw. On the other hand, the bevel lock is helpful if you want to set the bevel angles.

How to Unlock the Milwaukee Miter Saw

As a compact miter saw, the Milwaukee miter saw also comes with a locking system. When you transport it, you need to lock it for safe transporting. You lock its head, side rails, and other parts. Once you want to use it, you need to unlock it.

How to Unlock a DeWalt Miter Saw

There are several locking features in the DeWalt miter saw. You can check out the DeWalt user manual to figure out how to unlock these locks. To unlock the angle locks, you can bring together the knob and the lever. If the bevel gets stuck, you only need to lower the lever to unlock the bevel.

To unlock its down position, you need to loosen the knob. You can also unlock the knurled knob lock by turning it clockwise.

As you read through the different miter saw locks, you will learn how to manipulate them so that you can safely transport your miter saw from one place to another. Moreover, if you find yourself using another miter saw for the first time, you will know precisely how to locate the locks within it to allow you to transport and use it safely. 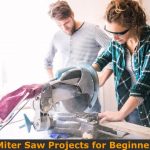 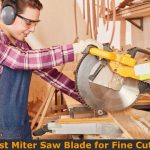 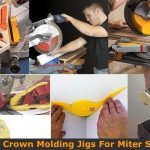 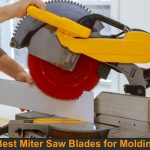 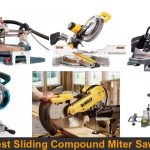