If you got transported back a hundred years ago to a traditional woodworking shop, you would indeed find no power tool in it. You would instead find a miter box. The miter box, of course, is the predecessor of the contemporary power miter saw. It is a crude device used by woodworkers to guide a hand saw in making 45° miter cuts. Moreover, it has a simplistic design and is wrought in either wood, metal, or plastic.

How Does Miter Box Work?

At present, however, power miter saws have already superseded the traditional miter boxes. Yet, some woodworkers can’t seem to part ways with the conventional miter boxes. They love these miter boxes and would argue that these devices provide better accuracy. Besides, they are safer to use, cheaper, and quieter. Plus, they don’t take up much space in the workshop.

The basic miter box is the simplest and most common miter box you will see out there. This basic type of miter box comes in a U-shaped block wrought in wood, aluminum, or plastic materials. It has an open top and ends. It can accommodate the workpiece’s width. It also comes with slots on its walls, and these slots are at the exact angle at which you are going to make the angular cuts.

Though there were mass productions of the miter boxes, woodworkers often made their miter boxes using wood. Miter boxes are easy to make. You only need to glue together three wood pieces. Then, you cut the slots using the same saw you use to make those angled cuts on your materials.

These basic miter boxes do not have a long lifespan. Over time, they start to show wear and tear due to continuous usage. When this happens, the miter box becomes less reliable when it comes to accuracy. So, you need to make another one for your woodworking tasks. Some innovative woodworkers fit their miter boxes with guides at the top to lessen wear on the angular slots.

To use this miter saw, you need to hold the workpiece against the fence while you cut using the miter saw. The miter saw is traditionally a kind of backsaw that comes with a wide blade. Woodworkers usually use the miter saw in tandem with the miter box.

When cutting using an adjustable miter box, you hold the workpiece against the miter box fence by clamping it. You also need to align the workpiece with the saw. Nowadays, the term “miter saw” refers to the power tools we commonly call miter saws.

In the past, woodworkers make their miter boxes out of the materials they had at hand. Then they use the miter box in tandem with their backsaw or whatever saw at hand. Nowadays, however, you can buy miter boxes in the following three different designs:

You will find ready-made miter boxes that feature molded plastic. You can buy these miter boxes from any brick-and-mortar hardware store. You can also buy it from home centers or online. Moreover, you can buy them at prices as low as $12 to as high as $25.

If you compare their prices to the power miter saws, you will notice the big difference in their prices. Yet, they basically do the same thing. You can use the miter boxes for light works like making frames for pictures.

Machined metal usually composes this miter box. So, it is more durable and stable than the molded plastic. This miter box type is a perfect choice if you would use it for trim and molding installation.

If you do fine craftsmanship, then this miter saw is perfect for your use. The fine woodworking miter box is ideal for use in types of wood that get easily damaged by power tools and rotating blades. This miter box is small and is a perfect option for light trim and pieces.

This is a classic and old-school miter box designed for fine woodworking craftsmanship.

Steps on Using a Miter Box

You can go traditional by using the miter box. It is surely exciting to use and would not require you to plug it into any electrical outlet. If there’s no electricity in your place, you can still go on with your cutting of moldings and trims using the miter box. Here are the succinct steps you can follow when using a miter box:

Step 1: You start by clamping the miter box to any stable platform or surface. You can use a quick-release clamp for this purpose. You can also secure the box using bolts and nuts.

Step 2: You can measure accurately the cut length. Then use the triangle or square to mark your line of cut on the workpiece. Make sure to measure perfectly.

Step 3: Place the wood onto the miter box. Use the clamps to secure the piece onto the box. Ensure that you orient the wood to the direction of the angle of cut. Make sure you know what kind of cut you would like to make, whether bevel or miter.

Step 4: Score the cut line a bit outside of your marked line with light passes. Afterward, you can increase the force of your passes to complete the cut.

Additional Tips When Using a Mitter Box and a Miter Saw

In the past, the miter box occupied a high place among the woodworking tools until the power miter saw superseded it. Hence, if you want to feel how the traditional carpenters worked before, you could always try and use the miter box for a change. 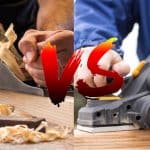 Electric Hand Planer vs. Bench Planer: The Differences You Should Know 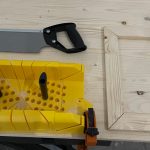 How to Use a Miter Box 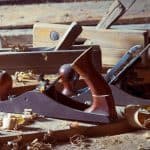