Sometime around 2010, I was just a tyro woodworker, trying to mentally debate what I would select between a table saw and a miter saw. I opted then for a miter saw. But just when I was about to buy a miter saw, I was once again faced with another dilemma of whether I should go for a non-sliding miter saw or a sliding one. Hence, I took another short pause, and just like any intelligent buyer, I did my research and made a good choice.

A miter saw, of course, is used for making accurate miters and crosscuts in your workpiece. It is a unique tool that allows you to make cuts at various angles, and this characteristic of the miter saw distinguishes it from other saws. However, when selecting a miter saw, you will be surprised by the different miter saw brands and models in the market today. Moreover, you need to decide which type you would choose: whether to go for a sliding or non-sliding one.

What Is A Sliding Miter Saw?

Another benefit of using the sliding one is that you are no longer required to make a frequent adjustment on the workpiece or the saw’s angle because of its larger capacity. This aspect of the sliding miter saw can help you save on your precious time when working.

Nevertheless, the sliding miter saw also comes with restrictions and limitations. In fact, its rails restrict it. Moreover, it can be challenging to use, especially if you are desirous of cutting at wider angles.

The primary advantage of sliding miter saw over non-sliding one is that it lets you cut wider boards. Let me give you an example. If you have a ten inches non-sliding miter saw, you can surely cut a board of approximately six inches wide. On the other hand, a twelve-inch one can work well with an eight-inch board (2 “x8”).

Though the sliding miter saw seems to be the best option over non-sliding, it is not without its downside and limitations. Its limitations, of course, lie in its size, weight, and price. When it comes to size and weight, it is bulkier and heavier than the non-sliding one. So, this means that you will have a more challenging time transporting it from one place to another.

If you are a contractor, for example, who needs to transport your sliding miter saw, you will surely need to exert more effort to do it. Another thing is that it is more expensive than the non-sliding one. So, it will put a more significant dent in your saving than a non-sliding one world.

What Is A Non-Sliding Miter Saw?

The non-sliding miter saw doesn’t come with a blade that can move backward and forward. It also doesn’t come with rails. It can cut at different angles, and it is perfect for an extensive trim or flooring project. Moreover, it doesn’t require an elaborate setup, and you can move around with ease. Besides, it is very functional.

The main function of the non-sliding miter saw is to provide you with straight cuts or angled cuts. It works best if you are cutting wood that isn’t that wide. Nevertheless, if you want to cut a wide wood piece, you need to cut the wood part by part, flipping it to cut every part.

Unlike the sliding miter saw, the non-sliding miter saw is simply lifted, then lowered to the workpiece. Hence, it can only cut limited width of the wood. Moreover, it can handle wood with six inches width with ease.

If you are going to invest in a miter saw, you might as well get the best miter saw for your needs. To help you figure out better which one between the non-sliding and sliding miter saw you would need, you can read through these detailed comparisons of these two excellent options to ensure that you will make an intelligent buying decision:

One thing to consider before buying a miter saw is the cutting range that you would engage in. If you would only engage in crosscutting and ripping wide boards, and you are quite an expert with the circular saw, you might as well not have a miter saw. But if you often engage in mitering like molding and framework, for example, or you are always doing squaring of lumber and milling, you will find the miter saw helpful to you. Besides, it can make your cutting tasks more manageable.

So, if you expect to cut wider wood strips, you might consider buying a sliding miter saw. But if you will only occasionally engage in cutting wider boards, you might as well settle for the non-sliding one.

Portability and Ease of Storage

Yet, it will give you a hard time if you intend to move it around more often from one point to another point. Moreover, if you have a cramped space in your workshop and you sometimes do your woodworking in the garage or backyard, you will need something that you can move around and store with ease. In such a case, the non-sliding miter saw would be a more viable option.

Another aspect you must consider is the types of cuts you need to do more often. As mentioned above, non-sliding miter saws thrive in making crosscut, bevel, angle, and compound cuts. It does well with tricky angles, and it does it efficiently. Moreover, it is pretty easy to set up and keep the setup for your next job.

When choosing between these two, it will also help to consider their applications. The non-sliding one is never restricted by rails. For this reason, it can move its arm within that specific arc. Hence, the non-sliding miter saw does well when engaged in miter cuts since it is not hampered by rails. It can likewise make bevel cuts via its pivoting arm.

The sliding miter saw, however, thrives more on cutting longer boards that would be used for crown moldings, while the non-sliding one can cut excellent angles and joint moldings and engage in cuts that necessitate cutting extreme angles.

The sliding miter saw is excellent for handling wider wood pieces, given its blade that could slide to and fro. It is also perfect for thicker pieces of wood. It is more versatile, allowing you to make accurate cuts that extend across the workpiece full width.

You can dial in the cut degree you would like to make, allowing you to create different angled cuts. It would be a perfect option if you got a lighter job that comes with wider width. Moreover, it’s ideal to use if you want to refurbish or replace your house crown moldings.

The non-sliding miter saw, of course, is more simplistic in design than the sliding miter saw. Hence, it is less dangerous to operate as long as you are focused on what you are doing. You should ensure that your fingers and hands are in safe places from the blade. You will also find most non-sliding miter saws with automatic safety shut-offs. They also come with lights for enhanced visibility while working.

Similarly, sliding miter saws are also not very dangerous to use as long as you follow the safety protocols. Yet, using it is fraught with more risks than that of the non-sliding miter saw because it comes with more moving parts. Since it offers a different way for the blade to travel, its use is riskier. Although it comes with safety features, you still need to be very experienced when handling it.

The price tags of non-sliding and sliding miter saws may vary depending on which brand and model you choose. Many of these saws come with several hundred dollars price tags. Of course, the higher the quality of the saws, the more expensive they become.

Since the sliding miter saw is more complicated and comes with extra features, it is reasonable to expect that it will be more expensive than the non-sliding ones. Its extra ability to cut more into a wood piece means it will need to have a higher price tag. So, as you shop around for a sliding miter saw, you will discover that most of them are either $450 or more.

You can adjust its bevel and miter angles with ease to make those complicated angled cuts. Such a feature, however, comes in handy when you need to make complex trim cuts, as in crown molding.

So, Which One To Use?

It isn’t easy to say that a sliding miter saw is better than the non-sliding one. Of course, the sliding comes with additional features that make it suitable for some projects. But your choice will usually depend on your cutting needs.

But why is the sliding miter saw preferred by many woodworkers? Well, the answer is simple. It offers more expanded cutting possibilities. Besides, most homes nowadays come with huge and massive crown moldings. Similarly, some innovations demand the use of oversized baseboards. So, the most suited miter saw for such cutting applications is the sliding miter saw that lets you cut 6″ to 12″ boards at an angle. Of course, you can make angled cuts on wider boards using the non-sliding miter saw, but you need to flip the board over to make the second cut.

You’ll be in an advantageous position to decide which is best for you between the non-sliding and sliding miter saws after knowing the succinct differences between these two miter saws. At the onset, it will be best to consider the abovementioned factors like applications, portability, cutting range, types of cuts, and price before you purchase a miter saw. Using what you have learned, you can narrow down your options and zero in on the perfect miter saw for your cutting needs.

It’s quite evident that each of these two options comes with its advantages and disadvantages. Being cognizant of these pros and cons can help you make an intelligent purchase. Of course, your number one holdback when buying is your budget. You can only choose according to your budget. The sliding miter saw, of course, is more expensive, so the non-sliding is your less expensive alternative. But if budget isn’t an issue, you can buy any miter saw that you would like to buy. 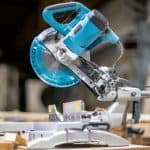 What is Miter Saw Used for?

How to Use a Miter Saw to Cut Angles 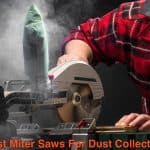 How to Change the Blade on a Miter Saw?