The riving knife controversy is one that has existed for ages amongst woodworkers. While many swear by always using a riving knife in their table saw, others do not see it as necessary. So, if you are wondering if you can use a table saw without a riving knife, the answer is yes. After all, the table saw has been in existence before the invention of the riving knife.

Can You Use A Table Saw Without A Riving Knife?

However, the bigger question remains ‘Should you use a table saw that does not have a riving knife?’

You see, the riving knife exists only as an optional safety feature in your table saw. In other words, your table saw will function without it, but cutting may be more dangerous. So, to play it safe, many woodwork experts now recommend and use the knife. As a result, they are now so popular, and almost everyone expects your table saw to have a riving knife.

Indeed, if you haven’t been on the woodwork scene for long, the riving knife may seem compulsory to you! Therefore, it is only understandable that you have questions. Not to worry, we will clear up the controversy for you.

In this blog post, you will discover all you need to know about the riving knife, including why it is a necessary accessory in your table saw. Keep reading to find out more.

What Is A Riving Knife?

A riving knife is a safety device that goes into a table saw, radial arm saw, or circular saw during woodwork activities. Usually attached to the saw’s arbor, the riving knife’s singular purpose is to make sawing a much safer task. Indeed, by using a riving knife in your table saw, you can eliminate kickbacks, which may otherwise cause injuries, and even loss of limbs.

If you have ever experienced a saw kickback or seen it happen, you’d know that it can pull the operator’s hand into the blade. If this happens, the possibilities are endless, and almost none has a happy ending. However, a riving knife can prevent such scenarios.

You see, when you push a woodwork piece through a table saw blade, the riving knife keeps the two cut sections from closing. While this sounds simple and straightforward, it has a critical implication. Without the riving knife, the cut section may close up in front of the saw blade. This may cause a pinching of the blade, thereby causing a potentially nasty kickback.

Therefore, while your table saw will indeed work and cut without a riving knife, it is not advisable to do so. However, although the riving knife decreases the possibility of a saw blade kickback, it is not 100% foolproof. So, as always, exercise extreme caution when you see a saw and make sure to concentrate on the job at hand.

How Does The Riving Knife Work?

The riving knife typically rides on the arbor of your table saw. If you wonder what the arbor is, it is that solid mechanism under the saw table that lowers or raises its blade. This means that as you raise or lower your saw blade, you inadvertently adjust the height of your riving knife alongside. As such, the knife says in line with your saw blade, irrespective of its position.

In addition, the space between the knife and the cutting edge of your blade is usually less than a quarter-inch. This small space ensures that the riving knife is very effective at its ‘job’ – separating the two halves of a freshly cut board as it goes through the blade. In essence, you have less to worry about in terms of kickbacks, jamming, and several related saw mishaps.

Advantages of Using a Riving Knife

However, there are rare occasions where a riving knife may obstruct your table sawing activities. Let us examine such scenarios.

When Do I Need to Remove the Riving Knife?

If you have ever watched a woodworking TV show, you may notice that the riving knife alongside other blade guards is conspicuously absent. More often than not, it is to make it easier to see the steps they take. Not because they are ‘pros’ and they do not need safety precautions. That said, there are some occasions when you must take out the riving knife.

One such scenario is when you need to use a stacked-dado blade to form a rabbet or dado. In such a case, the riving knife will get in the way, preventing you from being able to complete the cut. On the bright side, the dado is not a complete cut, so a riving knife will not do much to prevent a kickback.

Another example is when using a smaller blade, such as the 8-inch saw blade. Most table saws use blades with a 10-inch diameter. Therefore, the riving knife works best with them. However, if you use a smaller blade, there will be too much space between the knife and your blade’s back edge. This will effectively void the function of the riving knife.

All in all, asides from rare scenarios like this, the riving knife is discreet and quite effective at making a working table saw much safer. So, if you’re making standard crosscuts and rip cuts, it is usually best to have your riving knife in place. We recommend using the knife alongside other safety features to get the best results!

We hope that we have been able to clear the air on the ‘riving knife‘ controversy. For emphasis, the riving knife is not a ‘compulsory’ accessory in your saw. But, while you can indeed use your table saw without a riving knife, it is not the best policy. As you’ve seen in this article, the riving knife makes using a table saw much safer and less likely to cause injuries.

Do you have further questions about the riving knife or using a table saw? Please reach out to us. We’d love to help. 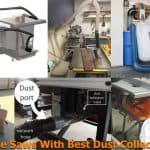 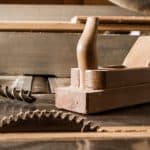