There are different types of saws you can find on your marketplace. If you want to cut a block of wood cleanly, then a chop saw would be the best tool for that one. The miter saw has features that would allow you to cut it to different angles.

A circular saw and a chop would most likely look the same as their components are almost similar. Cabinetmakers or woodworkers commonly use chop saws to create perfect square cuts. Angled and bevel cuts are possible with the particular chop saw models. These tools are often referred to as miter saws when they come equipped with these characteristics. One of the main benefits of a chop saw is its ability to make accurate cuts. Because it’s quicker to use a chop saw than a circular saw, many cabinetmakers don’t bother investing in a separate circular saw. Cutting wood of various thicknesses is possible due to the blade’s size. Chop saws can also cut metal using specially designed blades.

A rotating abrasive disc is placed on a pivoting arm of a chop saw. For abrasion, a diamond covering is utilized instead of the disc’s teeth. Using a chop saw, even the most rigid materials may be easily cut into smaller pieces.

While miter saws can cut to different angles, chop saws can only cut 90-degree curves because they cannot rotate to other sides.

Compared to miter saws, a chop saw is much bigger and is more often utilized because of its sheer power. A 14-inch blade would be a typical minimum size. Also, certain materials generate a lot of sparks when cut with a chop saw, so keep an eye out for anything flammable around.

Purpose of a Chop Saws

Chop saws are great for cutting through a variety of different materials with ease. It is even possible to cut lumbers with nails pierced on them. Given its immense power in cutting various materials, the toothless chopping blade it uses makes the best perfect cuts. Hence, this tool is one of the most favorite tools of construction workers.

It’s possible to replace the blades on your chop saw. However, exercising caution while installing a toothed blade is advised. Compared to miter saws, chop saw blades have a higher revolution per minute (RPM), thus making it quicker. When cutting wood with a toothed edge, you face the danger of severe damage from hazardous backlash.

A chop saw is a fundamental tool for construction when it comes to building a home from the ground up.

When you use a metal chop saw, you’re using a particular saw designed to cut through steel. A metal chop saw is the ideal tool to use if you regularly work with metal. So long as the cuts don’t have to be slanted, you’ll be able to quickly and cleanly cut the metal you’re dealing with without any problems.

All you have to do is align the metal with the abrasive cutting tool, do a short dry run to ensure that it will strike the target, then don’t forget to wear your protective clothing. Turn on the blade and let the edges take care of the rest. Also, don’t be afraid to let the blade do the job on its own; all you have to do is wait for it to finish cutting the metal.

The most popular kind of chop saw is a wood chop saw. You’ll be able to complete tasks quickly and efficiently, which will allow you to remain on schedule. Y However, you must be sure that your saw does not need angled cuts. A chop saw can only go up and down with its blade.

This implies that if you have to make such kinds of cuts regularly in your work area, you’ll need to buy in a miter saw capable of cutting to different angles. Although wood chop saws are Incredibly efficient and straightforward to operate, they need attention to safety measures and the use of protective gear for optimum quality.

If you work with complex materials regularly, you’ll want to invest in an abrasive chop saw. Instead of having the typical cutting teeth, abrasive chop saws have a different one to cut hard materials properly. You may use them to cut through materials like concrete, ceramic, clay tiles, and even metals.

Typical chop saws and abrasive chop saws are similar only in their cutting process. They can only cut up and down and cannot cut at different angles, unlike miter saws. Despite this, they are proven practical and invaluable tools should you find yourself dealing with this kind of material often.

When and What Type of Chop Saw to Use

Chop saws may be used to cut various non-ferrous materials, including wood, aluminum, decking, aluminum, molding, and much more. A circular saw may be used to cut material that is too broad for your chop saw. Miter saws would be the perfect tool for cutting bevel and angle cuts in moldings and other materials.

Instead of a blade with teeth, most chop saws utilize an abrasive disc, allowing them to swiftly cut almost any material, even if it is a hard one. Despite the immense strength, you can still be able to cut things precisely with a chop saw. As with circular saw, the blades are round and available in various forms and designs, including teeth-bearing ones, although they are not the expected standard.

Cutting through a stone or aluminum with chop saws can create a lot of sparks. While they won’t do any damage to your body or clothing, they do put on quite a display. When using a chop saw, keep an eye out for anything that may catch fire easily.

Generally, chop saws utilize a 14-inch disc to cut. However, larger and smaller blades are available for different sizes of machines. Blades with a greater surface area provide them with the cutting power required for more extensive and harder cutting jobs.

For power tools, chop saws are the go-to choice for experts because of their broad blades, even if they can only cut up and down.

Is It Possible to Cut Angles Using Chop Saws?

Chop saws can only produce up and down cutting. On the other hand, a miter saw is a perfect type that can cut different angles. The only way to accomplish this is utilizing a bevel protractor and a hand saw when using a chop saw. A pencil can be a great help to keep you on track with the angle cuts that you want.

When working with power tools, safety is paramount. When you’re doing DIY projects, knowing the rules of usage and the reason behind them may go a long way toward keeping you safe and helping you make better choices.

The blade of your instrument is, unsurprisingly, the component about which you must be most vigilant. Anything that gets caught in the saw’s edge may be seriously injured due to the pace at which it is cutting. Before you begin working:

You have the most excellent control when the saw blade is stationary or operating at full speed. The most significant danger occurs when the edge is starting up or slowing down. Although it can’t cut through wood at a low rate, the blade is still more robust than you are, and it will buck or catch up and fling wood. That is why you should always be careful. To keep your vision protected, always wear safety glasses. Earmuffs or earplugs are a good idea while working with power saws since they may be pretty noisy and possibly harmful to your hearing. Start the blade distant from the timber, and don’t touch it until it reaches maximum speed to keep it under your control. As soon as you’ve finished cutting, please turn off the power and let the blade cool completely before pulling it out from the timber.

When not in use or conducting maintenance, always disconnect your saw to avoid unexpected incidents.

When using a chop saw, make sure your hands are at least six inches away from the blade and out of the way. This distance is often marked on the saw with a line. 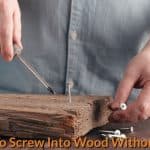 How To Screw Into Wood Without Drill 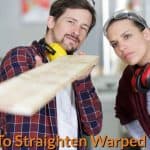 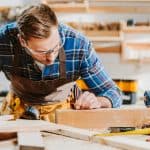 Names of Tools Used by Carpenter 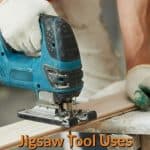 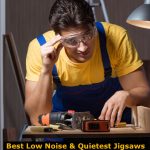