Once you try to jumpstart your woodworking career, you will quickly discover a kaleidoscope of woodworking tools and equipment that can indeed impress you. But one piece of equipment that you can’t do without as a woodworker is the circular saw. The circular saw had a lengthy history of evolution dating back to the 18th century and maybe even further to the beginning of civilization.

As a tool, it features a toothed disc called the “blade.” This blade cuts through different types of materials via its rotary motion. The blade is attached to an arbor, and it spins at a tremendous speed as it rips and cuts through materials. As a modern tool, we can trace back the first appearance of the contemporary circular saw to the late 18th century, though circular blades were already common during those times.

If you meticulously trace back the evolution of the circular saw, your research might end up somewhere in India, Mesopotamia, or Egypt. These three places were cradles of civilizations. Hence, there is a big chance that these places were also the origins of the very first circular saws. However, this article focuses more on the modern circular saw, traceable to the late 18th century.

Circular saws in most sawmills utilized smaller blades for resawing lumbers after these lumbers underwent up and down passes. These pieces of lumber got circular and vertical saw marks on the sides. Soon, these saws improved and became more efficient in cutting small pieces.

After 1822, however, sawmills shifted to large circular saws. These saws got blades with maximum diameters of 3 meters. These larger-blade saws, however, were not practical. They became practical, however, when the steam engine got invented.

One man credited for inventing the circular saw was an engineer, Walter Taylor. He used to supply the British Royal Navy with ship pumps as well as rigging blocks. With these inventions, he contributed to the enhancements of the British Royal Navy ships. He had a company sawmill located at the docks, wherein he installed various machines and table saws. These machines also included circular saws. Although he used circular saws, Taylor did not patent his inventions.

Samuel Miller (Southhampton, England) obtained a patent for his saw windmill in 1777. He submitted a patent and was approved. This patent was for a saw windmill. He did not specify the form of his saw, suggesting that he did not invent the said equipment.

Another person who claimed to be the inventor of the circular saw is Gervinus (Germany). He was credited for inventing the modern circular saw three years after Miller.

Tabitha Babbitt and the Spinning Wheel

The spinning wheel might be the primary inspiration in the invention of the circular saw. It was a tool that could transform natural fibers into yarn or spinning thread. Its components included a drive wheel, treadle, table, and legs. It also came with parts that held the natural fibers.

Tabitha Babbit thought of how inefficient and tedious the use of the traditional pit saw was. So, she conceived of improving it by inventing a tin blade that could operate using a rotary motion. It would derive its rotary motion from the spinning wheel.

She only needed to pedal to make the wheel spin. She designed a larger version of this circular saw for the sawmill. The design soon got noticed and later modified by other communities.

Further Development of the Circular Saw

Another person who claimed to invent the circular saw was the Frenchman, Edmond Michel, who, in the early 20th century, moved to the U.S. He stayed in New Orleans, and he claimed that he invented a handheld circular saw. He conceived of his invention while watching sugar farmers laboriously cut thick stalks of cane using machetes.

Just like any inventor, he thought of a better way to do it. So, he mounted onto a standard machete a mixer motor. He also added a worm wheel gearbox together with a two-inch circular blade. It worked though it necessitated an external generator. Thus, it was a bit impractical.

However, a century later, Raymond DeWalt created a circular saw that he attached to a radial arm. Thus, the modern-day circular saw as we know it came into existence. With his design, the circular saw became better, allowing for greater cutting depth and control. Raymond DeWalt became the founder of the well-known DeWalt Company that still manufactures various woodworking power tools like circular saws.

Born in Oakville, Pennsylvania, DeWalt got the credit for inventing the radial arm saw in 1922. Later in 1924, he found the DeWalt Products Company to manufacture his new invention called the “Wonder-Worker.”

Seven years later, Art Emmons enhanced the circular saw further by creating the first handheld circular saw. The motor of Emmons’ circular saw was lightweight. Hence, it was portable. Emmon’s design is a helical-drive saw. This design later became the basis of most portable circular saws in the market today.

Enhancements of the Circular Saw

Since the invention of Emmon, the circular saw went on evolving. Nowadays, you will find various types of circular saws that come in various designs and sizes. These contemporary circular saws feature universal motors that are lightweight. They have motors that AC and DC can power.

Since the invention of the first circular saw, it had undergone various phases of evolution. One company that started marketing table-mounted saws was W.R. & John Barnes. His company was located in Rockford, Illinois. The saws they manufactured were treadle-powered.

To operate these saws, the operator utilized his feet. Its design was somewhat similar to those of the sewing machines. The user would pump the pedal on the floor underneath the table, and this pumping motion enabled the saw to spin. They sold this design in 1878.

In 1922, Raymond DeWalt introduced the first circular saws with radial arms. Of course, this saw offered more versatility than the treadle-powered ones. The blade got attached to an overhead arm. You can move and rotate this arm, letting the saw blade to be mobile.

With the radial arm, you could easily control the direction and depth of the cuts. This design became so popular, prodding DeWalt to establish his company.

The portable circular saws came into use in 1929, when Art Emmons invented his first portable circular saw. It made use of a helical drive and an electronic motor. You can take this saw to work instead of taking your work to the saw. Emmon’s design became so popular that it became the basis of modern-day portable saws.

The circular saw had come a long way since it was first conceived in the 18th century. Nowadays, circular saws come in various brands and models. Besides, DIYers, hobbyists, professionals, and contractors utilize circular saws for their projects.

The circular saw has become very popular because it is handy and easy to operate. You can use it for construction projects as well as household projects. Moreover, it could cut with utmost precision, and it is pretty reliable.

Circular saws are very versatile and will allow you to cut harder materials and wood. You can also use them to cut stone and plastic. On wood, you can use it to make crosscuts, rip cuts, and angled cuts.

The contemporary circular saws are already a portable tool to carry around with ease to your working area. They come with many varied features that are a far cry from the features of old circular saws. 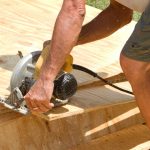 Why Is My Circular Saw Kicking Back? 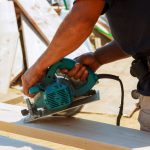 Why Does My Circular Saw Keep Stopping? 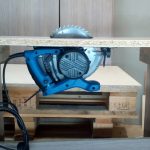 How To Use A Circular Saw As A Table Saw

How Deep Can A Circular Saw Cut? 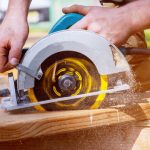 How Many Watts Does A Circular Saw Use?